We have been in business since 1975 offering exclusively JOBST products.
Login or Register

Starting with its founder, Conrad Jobst, who suffered from venous disease, JOBST® has always had the strongest commitment to improving the quality of life for those with venous disease or swelling related conditions.

We are committed to quality. This quality is reflected in our superior design. A design which is tested with patients and manufactured in our state-of-the-art manufacturing facility.

We consult physicians to ensure that our product is helping their patients. That is why we are the #1 physician recommended brand.

JOBST® is committed to total satisfaction for its recommenders and wearers. That is why each product comes with our unique guarantee.

Conrad Jobst founded JOBST® in 1950 in Toledo, Ohio. Born in Germany, Conrad was both a mechanical engineer and inventor. He applied his varied expertise and personal experience to the development of gradient compression garments, which relieve the symptoms of venous insufficiency. About the same time VARITEX – the predecessor of JOBST® in Europe – became established in Germany and began cooperation with professionals in phlebology and lymphology.

After Conrad’s death in 1957, his wife, Caroline Jobst, successfully grew the business. Under her leadership, Jobst expanded the product lines to include Ready-to-Wear vascular garments, consumer support stockings, plastic and reconstructive surgery garments, and anti-embolism stockings. Sales extended to virtually every continent as the JOBST® reputation for quality grew.

On April 2, 2001, the business was renamed BSN-JOBST as it became an affiliate company of BSN medical Inc., a joint venture holding company equally owned by Smith & Nephew and Beiersdorf.

Then functioning as an independent player, BSN was aquired by Montagu Private Equity firm in February 2006, a leading private equity investor in the European mid-market with offices in London, Manchester, Paris, Düsseldorf and Stockholm. Over the last 38 years, the firm has supported more than 400 businesses operating across a range of different segments and sectors, and currently has more than €3 billion under management. www.bsnmedical.com 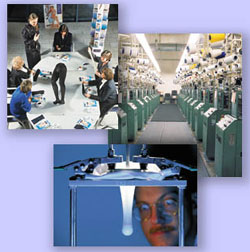 The innovative approach taken by Conrad Jobst lives on today with our commitment to technological excellence. All our research efforts are directed towards achieving the highest quality, which results in outstanding compression products:
Designed to deliver comfort, health and style for higher assurance of medical efficacy
Higher user satisfaction and compliance

The JOBST® Textile Research Laboratory
This facility is the driving force behind the innovation, dynamic development and excellent quality standards of JOBST medical compression stockings.

Highest Efficacy and Safety for Our Customers
At JOBST®, the quality system incorporates a design control process, which verifies that products meet or surpass customer expectations. It validates that they can be consistently produced in manufacturing. To achieve this standard, every JOBST® employee is part of our quality assurance system.

Your total satisfaction is our goal. If your new JOBST® product does not meet this goal, simply wash and return it to the retailer where you purchased the product and we’ll do our best to make it right…..
We guarantee it!

If for any reason whatsoever you are dissatisfied, we will cheerfully refund your money or replace your compression socks, stockings or hosiery at your request.